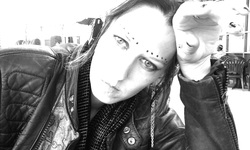 I funnel my experiences into creating.  I pour my energies into acquiring and perfecting the skills of creating.  I strive to make all my creations speak without effort, shout when they need to, and whisper when there is silence.
​
My inspiration is not limited the things that I have experienced, but the things that may be experienced  - dreams - and worlds seen though the screen or in a book - imagination.  It is through a journey of the mind that I create, be it tattoos and vampire stories or scenic design and landscapes in oil.

As an adolescent, her studies were concentrated on theatre, acting, and literature & her social life included joining a vampire cult at a coffee house.  She graduated from Binghamton High School in 2000.

Through a series of happy accidents and decisions that led her to embrace the dark side of theatre, she received a Bachelors of Fine Art in Production Design from the State University of New York at Fredonia.  Her thesis project was full research & scenic  design for Paul Mockovak's  RITES OF SPRING and other dances.

From 2007 - 2010, AmarA was the Adjunct Professor of Theatre Design and Costume Shop Manager at Wells College in Aurora, NY.  While there she was awarded OUTSTANDING ACHIEVEMENT IN SCENIC & COSTUME DESIGN for the production of Escurial / The Maids.

Following a period of travel and experience, jk & AmarA landed in Seattle for a year, where AmarA worked as a freelance artist, finding her gigs on craigslist.  She found her first taste of emerging success documenting her experiences on the set of the indie punk film Fat Kid Rules the World (directed by Matthew Lillard, based on the K.L. Going book)  with her underground series Extra Artist on the Set of Fat Kid Rules.

Returning to her twilight zone in upstate New York, AmarA began juggling her independent & emerging art career with her established design career.  She and jk have taken up residency in the Catskill Livery Barn in Triangle, where they wedded each other Dec 21, 2012.  As collaborators, they are the resident scenic designer for Tri-Cities Opera and Ithaca Shakespeare Company, and recently created the costume design for the  Jeff Nominated production JERUSALEM in Chicago.